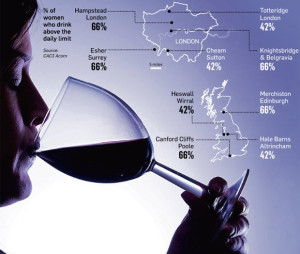 WEALTHY women living in Britain’s most exclusive postcodes are far more likely to have an alcohol problem than those residing in more modest addresses.

New research has found that females in places such as Knightsbridge in London, Esher in Surrey and Merchiston in Edinburgh are more than twice as likely as the national average to drink too much and suffer from mental illness or depression.

Households in these enclaves are among the richest in the country with many residents living in multimillion-pound homes and often earning six-figure sums.

Nearly two-thirds of the women in these areas drink more than the recommended limit of three units a day — higher than any other social type, according to an analysis of the country’s health and habits broken down by postcode area.

About 6.5% of men and women in these areas also suffer from anxiety and nerves, compared with a national average of 2.9%. The only social type with a higher propensity to mental illness or depression are those living in highrise flats, elderly people in social housing and young renters.

“Women in these [expensive] areas have lavish lifestyles, but without the need to work, and they are extremely socially active. It is the classic group of ladies who lunch,” said Patrick Tate, director of analytics at CACI, the firm which carried out the research.

The data will add to growing concerns among health officials about middle-class drinking, seen as a “silent epidemic” that can pose as many health problems as binge drinking.

The research has also uncovered a “footballers’ wives” effect. Four in 10 women in leafy suburbs such as Totteridge in north London, Heswall in the Wirral and Hale Barns in Altrincham, all areas that have become synonymous with wealthy footballers and their partners, drink more than three units of alcohol a day compared with 28.9% nationally.

Men in these exclusive neighbourhoods are also more likely than the national average to drink too much, but the trend is less marked than for their wives and girlfriends.

“Research has shown that middle-class drinkers may be disadvantaged by their advantage — in other words, aspects of their lifestyle which are known to promote health such as low-fat diets and exercise are able to mask symptoms related to alcohol problems,” said Lyn Brierley-Jones, research fellow at the University of Sunderland’s department of pharmacy, health and wellbeing.

Glynis Jones, a retired academic from Nottingham, typifies the growing problem of women with relatively lavish lifestyles who have serious drinking habits. For years Jones, 62, led what she describes as a “functioning lifestyle” with a successful career, but at times she was consuming up to 10 bottles of wine a week.

“When I married for the second time my husband, who is since deceased, was fairly wealthy and we would holiday abroad regularly all over Europe. The children were out of the frame and I was not short of money. Even though I was retired, I could always go to the off-licence and buy several bottles of wine,” Jones said.

“I never went to work drunk, I never missed work . . . but I never had a sober evening and at the weekends I would drink all day.”

Jones has now been sober for three months after finding help through the Harrogate Sanctuary, an organization that specializes in gender and age specific care for alcohol dependence.  Sarah Turner who is the founder of the Sanctuary, campaigns tirelessly  for tailored care. “The work I do was the result of having been through the most desperate struggle myself to find appropriate treatment, and failing miserably “ says Sarah. She has been hailed as a One Woman Army by Eric Appleby CEO of Alcohol Concern, and Andrew Langford of the British Liver Trust.

Brierley-Jones said Jones’s attitude was not unusual. “Our research showed a common perception among some middle-class groups that regularly drinking at home, particularly wine, is safe and sensible.”

“These home drinkers don’t see their drinking pattern as problematic, but evidence suggests that such regular drinking will lead to significant health problems later in life.” she said.

Women and Booze in the News – The Times